Skip to content
HomePoliticsGovernor’s Money Race: Some Campaigns Good, Some In Trouble

June 30 comes but once a year, and for political watchers it’s like Christmas. When you have a Governor’s race, where early polls mean almost nothing, the real measure of any candidacy is what’s disclosed by their campaigns in the middle of the year.

So here at GeorgiaPol we are taking a deeper dive into the financial numbers posted by the announced candidates for Governor to get a sense of who is real, who needs to improve, and who should be thinking about getting out.

We are looking at the only numbers that matter right now, the amount raised for the primary, the amount spent, and the primary cash on hand. General money cannot be used until you win the primary, so it is not included in this matchup of primary strength. Because these campaigns started at different times, we divided the amounts by the numbers of days since the campaign began, thus giving us the metrics used to judge campaigns: Raise Rate and Burn Rate.

Let’s begin with the Republicans. 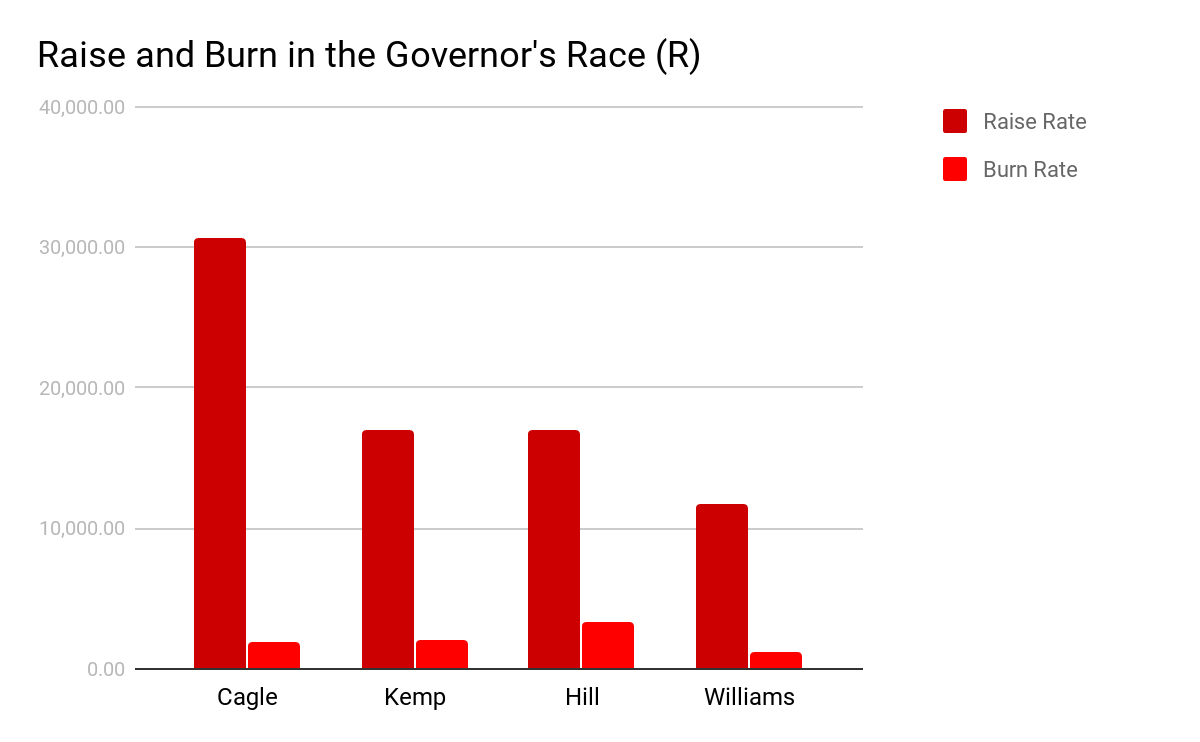 This graph is mostly as expected. Lieutenant Governor Casey Cagle leads the fundraising race. Cagle is the frontrunner until some polling says he isn’t and thus he will have the easiest time raising money in this race. His burn rate, at just above $1k/day, is appropriate for this race. Secretary of State Brian Kemp and Senator Hunter Hill jointly occupy the second slot in raise rate, but Hill’s Burn Rate is slightly worrying, The best burn rate on the field, Senator Michael Williams, comes with a large asterisk, as he gave himself $1 million.

These are the types of ratios you expect to see, and need to see at this point in the race. The ratio of raise to burn goes down over time, as early money is easiest to get and costs go up. 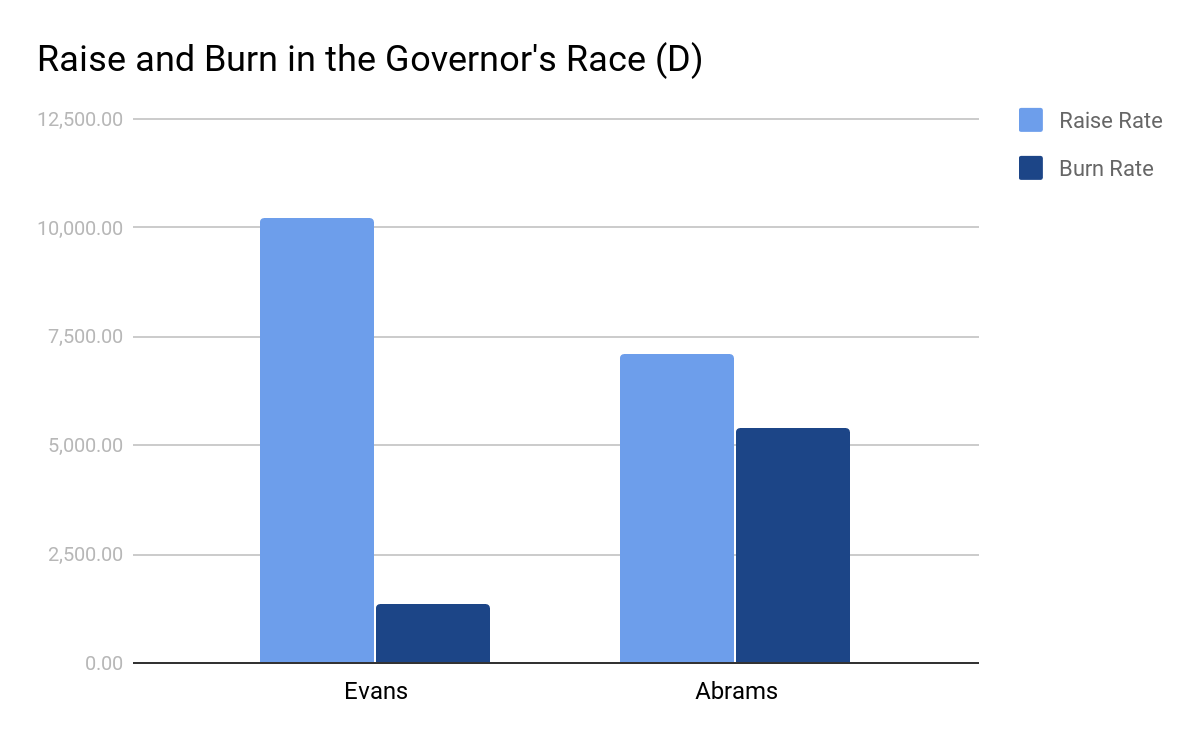 So bad we decided to look closer to see if maybe there were large one-time expenses that inflated the burn rate. But even after we removed the Facebook ads, plane flights, and hotel charges that might not be repeated month after month, Abrams still has 130k in monthly expenses – salaries, rent, etc.. Based on her raise rate, that is not sustainable. To explain, here is a graph of their Primary Cash on Hand (per the June 30 report) against their costs to date. 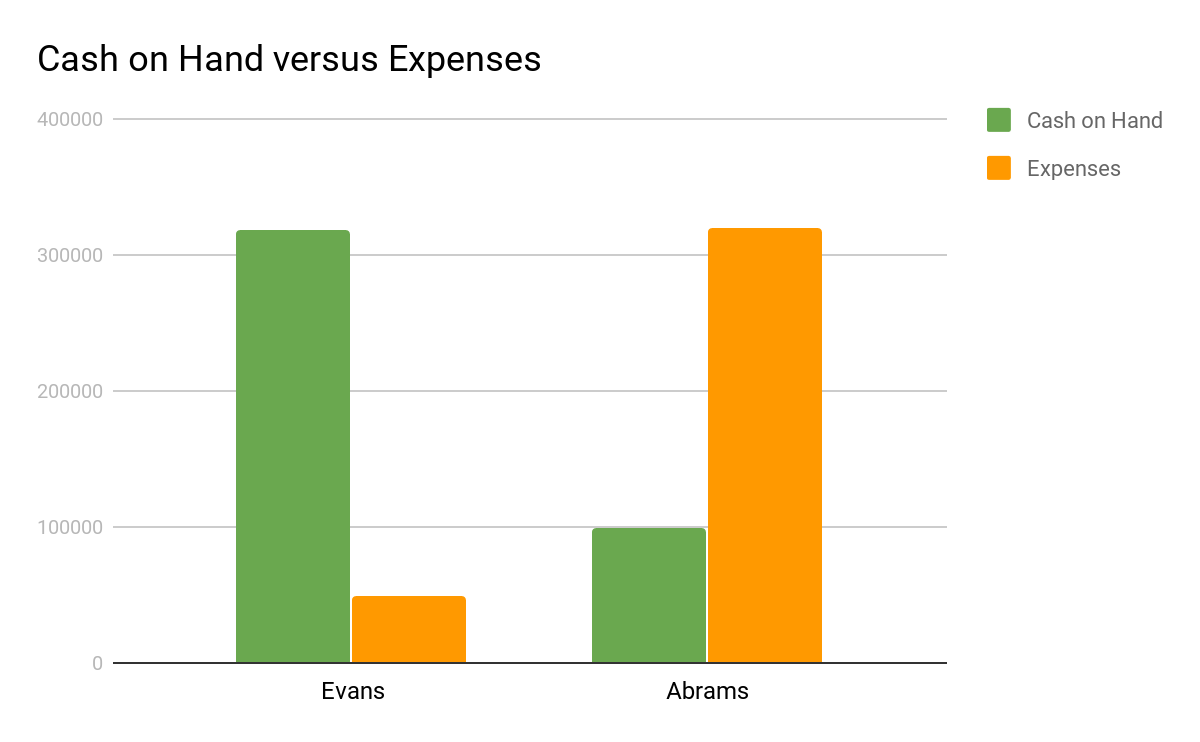 This chart comes with two major caveats The first is that not all of either of the above candidates expenses are recurring. We looked more closely at Abrams disclosure and found 130k in recurring expenses, still dwarfing her 98k Cash on Hand.

And second, Evans started the race a month out from the disclosure, and a month after Abrams, meaning that she undoubtedly has recurring costs that would have kicked in after this reporting period.

It also means, though, that she far outpaced Abrams in raising overall.

Once Abrams paid all of her staff at the beginning of July, she’d be close to $0. It’s time for them to get paid again. The chances that she raised 130k last month to cover those costs is low. This campaign is headed toward the red.

If she can’t make payroll, she’ll have to start cutting staff soon. Though that will drop her monthly spend, it won’t fix the overall problem.